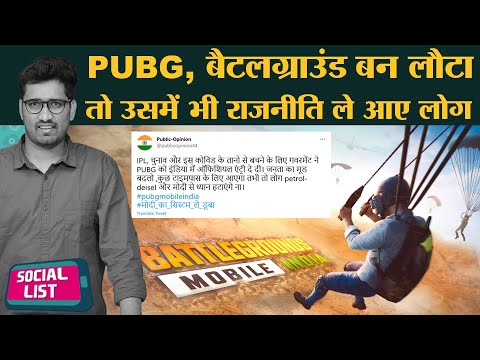 In this episode of Social List Ashish Mishra Talks about PUBG. Battlegrounds Mobile India will be the official free-to-play battle royale game from Krafton. The new name for the Indian version of PUBG Mobile has been in the news since earlier this week, but the makers are giving away more details officially. In addition to setting up a new website — battlegroundsmobileindia dot com, Krafton has said that the pre-registration for Battlegrounds Mobile India will begin soon and that this game will be available to play “only in India.” Krafton has still not shared a release date, but it seems there is no longer a roadblock to PUBG Mobile’s return to India. A Punjab Police official was suspended on Wednesday after a video emerged on social media in which he was seen kicking the baskets of a vegetable vendor. The incident occurred earlier in the day when Phagwara SHO Navdeep Singh and his team were patrolling the town and checking for infractions of the partial lockdown imposed in Punjab. When they arrived at Sarai road, where several roadside vendors set up shop, SHO Singh got out of his car and started kicking the baskets of a vegetable vendor. West Bengal BJP on Wednesday released a video on the post-poll violence and used the photo of Abhro Banerjee, an IndiaToday. journalist, to claim it to be that of ‘Manik Moitro’ who had died in Sitalkuchi. The BJP had earlier shared the names of 9 victims of post-poll violence in Bengal and among them were Monik Moitro and Mintu Barman, who were killed in Sitalkuchi. However, no one was identified as ‘Manik Moitro’.

Produced By: The Lallantop
Edited By: Vishal