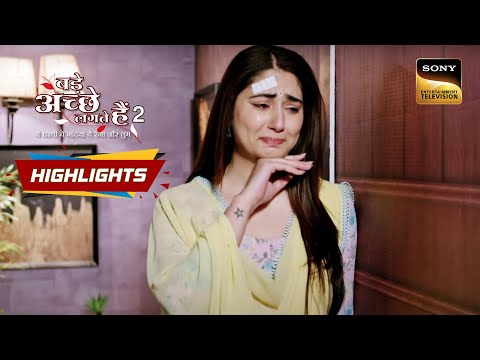 Ram’s memories of Priya rush back and he asks her for a fresh start. Priya is heartbroken to see Ram and Vedika get closer to each other and dance. However, Pihu remains heartbroken as she can’t meet her father yet.

About Bade Acche Lagte Hain 2:
——————————————————
Bade Achhe Lagte Hain is the story of two strangers getting married and falling in love. Priya is a happy-go-lucky woman in her early 30s, not married so far, and sure that she wouldn’t be able to get married. She takes tuition for college students and is happy with the world. Ram Kapoor, a wealthy man in his early 40s, is a ruthless entrepreneur who also believes that he has missed the bus of marriage. But as fate would have it, they bump into each other through a minor car accident which hurts their egos more than their vehicles and then after a series of miscommunications and misunderstandings, destiny contrives once again to get the two married. What more surprises await Ram and Priya? Will they fall in love? To get these answers, watch Bade Achhe Lagte Hain…!

Click here to catch all the Highlights of your favourite shows:
https://www.youtube.com/playlist?list=PLzufeTFnhupyLDvlHbK83guV1MShfTvAl