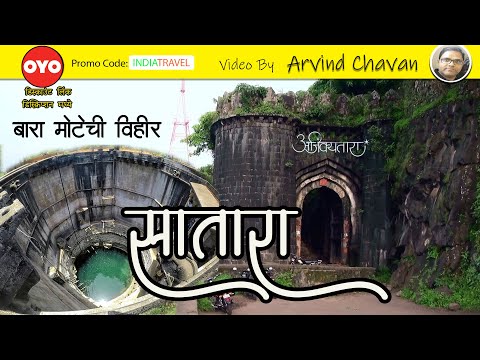 Ajinkyatara (मराठी:अजिंक्यतारा) ( meaning “The Impregnable Star”) is a fort on one of the seven mountains surrounding the city of Satara in the Sahayadri Mountains of Maharashtra, India. It is a 16th-century fort that was called “Ajimtara” during Aurangzeb regime and was based on Aurangzeb son’s name, Ajim. Marathi novelist Narayan Hari Apte named the fort “Ajinkyatara”, when he wrote his very first novel on the same name (first published in 1909- Ref: His interview published in marathi Pratishthan Monthly in December 1970 issue). Now also holds the television tower for the city of Satara. This fort has been the place where several pivotal moments in Maratha history took place.

The fort is located at Ajinkyatara Mountain, which is 3,300 feet high. As the fort is in the higher altitude, visitors can enjoy a magnificent view of the entire Satara city.
In 1708, Shahu Maharaj won Ajinkyatara, which remained with the Marathas till 1818. The Ajinkyatara fort is a major historic place of Maharashtra, and was very vital as one could keep watch over the entire South Maharashtra.
One can easily reach Ajinkyatara by road, train or plane.
By road – It is 2 hours from Pune, 4 hours from Mumbai and 3 hours from Kolhapur.
By train – Nearest station is Satara Road, and major station is Pune.
By plane – Nearest airport is Pune, and nearest international airport is Mumbai.

Bara Motechi Vihir (Historic Well) near Limb – Satara – Built in 1646 by Shahu Maharaj and Virubhai Bhosale. The well is octogonal in shape and was built to look like dug-out shivling. It is 110 ft deep and 50 foot in diameter. This historic well was said to provide water a huge amrai (Mango plantation) with its 12 moats. There are four sculptures of tigers on the inner side of octogonal well. The staircase leads to the grand entrance arch below the ground level. Two secret ways from second arch leads to Mahal/gallery. The gallery is open both sides, one inside the well and second towards main entrance. Above the Mahal/Gallaries place of Throne is situated.