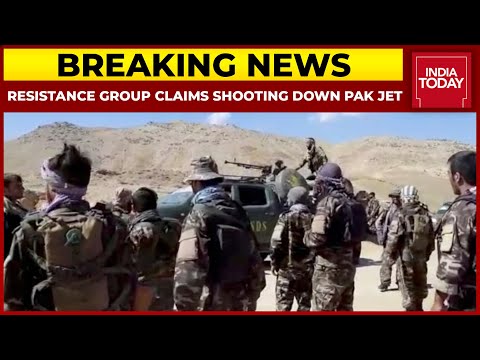 Resistance group claims shooting down Pakistani jet. Ahmad Massoud tweeted the picture.
Ahmad Massoud, the leader of the Resistance Front, confirmed the bombardment by Pakistan and Taliban in Panjshir which killed Fahim Dashty and many of Massoud’s family members. He has alleged that Pakistan directly attacked Afghans in Panjshir and the international community watched silently, says reports.
The Taliban have said they have conquered the Panjshir Valley — the bastion of the resistance forces and declared the end of the war in Afghanistan. However, members of the resistance forces refuted the claim of the Taliban and called it false. They said the resistance force fighters are at strategic locations and fighting the Taliban.

Subscribe to India Today for NEW VIDEOS EVERY DAY and make sure to enable Push Notifications so you’ll never miss a new video.
All you need to do is PRESS THE BELL ICON next to the Subscribe button!
India Today TV is India’s leading English News Channel. India Today YouTube channel offers latest news videos on Politics, Business, Cricket, Bollywood, Lifestyle, Auto, Technology, Travel, Entertainment and a lot more.