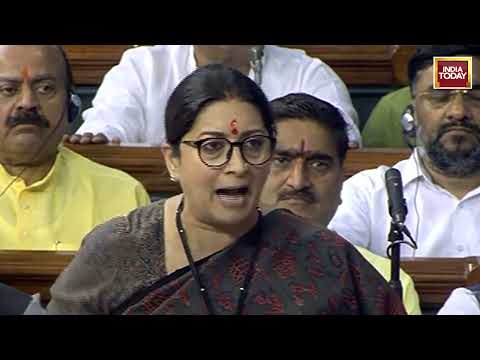 Union ministers Smriti Irani, Nirmala Sitharaman and other women BJP MPs on Thursday slammed Congress for demeaning the women and the tribals of India after Congress leader Adhir Chowdhury referred to President of India Droupadi Murmu as ‘Rashtrapatni’. The Congress needs to apologise in Parliament and on the streets of India, Smriti Irani said adding that despite being led by a woman, Sonia Gandhi, Congressmen continue to demean the women in constitutional posts. Both Lok Sabha and Rajya Sabha were adjourned till noon over protests against Adhir Chowdhury’s comment.

Ever since Droupadi Murmu was nominated for the president post, she was targeted maliciously by Congress and the attacks do not seem to stop against her even after being elected as the President, Smriti Irani said. “Adhir Chowdhury addressed her as Rashtrapatni knowing well that this humiliates the highest constitutional post. The country knows that the Congress is anti-tribal, anti-Dalit and anti-women,” Smriti Irani said.

The issue was raised inside Parliament as women MPs, including Nirmala Sitharaman, protested against Adhir Chowdhury’s word, demanding an apology from the party.Adhir Chowdhury, however, claimed it was a mistake and he did not call Droupadi Murmu ‘rashtrapatni’ deliberately.

Subscribe to India Today for NEW VIDEOS EVERY DAY and make sure to enable Push Notifications so you’ll never miss a new video.

All you need to do is PRESS THE BELL ICON next to the Subscribe button!